Sherpa
What you said makes a lot of sense. I always buy the best example I can find and was lucky
to buy when prices were more affordable. However, I had 18 quality ( mostly Enicar ) vintage watches
that require servicing at least once every 5 years. It seemed uncomfortable to own so many watches when
some might only be worn once every 18 months.
There does seem to be a definite connection between old watches and old cars. Avoiding potential money pits
is the way to go. so I always avoid ' projects' being sold on the cheap.

Staff member
Enicaristi
Sherpa
It is good to see Živan has joined us here as well as one wonders sometimes whether this is essentially an older man's hobby activity.

Rich, I wonder whether there are other connections besides the one between mechanical watches and cars?

For a while, I have collected 1:32 scale live steam locomotive models, some of which I have built from kits or else modified to bring up to museum quality. During my participation in the hobby, I discovered that a small portion of live steam hobbyists are also licensed amateur radio operators as I am as well. With the age of steam long having come to an end . . . and amateur radio becoming not so exotic as it once was in the days before an Internet was conceived and developed, one wonders whether these other hobbies will fade as the old-timers die off?

So it's always good to see interest in what may be called 'vintage mechanical arts' shown by young people.

I know there is a connection between watchmakers and machinists and between machinists and model engineering hobbyists. And of course, some of these models are radio controlled.

A common thread, one among others, may be in being something of a techie.

[I would have used the word "nerd," but the word has unintended negative connotations.]

This does not apply to me, of course.!

Now where did I leave my pocket protector, Rapidograph and slide rule . . .

SOTC - State Of The Collection, I think.

State of the Collection

Bill from the UK and found this Forum through TZ 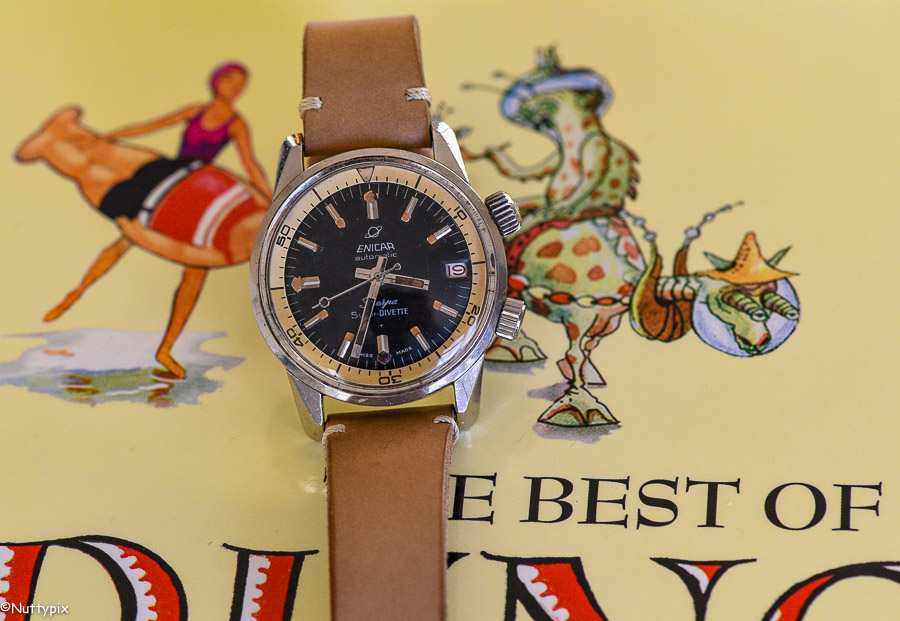 Hallo, I just registered to this forum.
I am a watch enthusiast from the Netherlands and I specially like Enicar as a brand.
They made such great looking watches and made in-house movements what I think is a pré.
I have several Enicars, but not the fancy ones I see here a lot. I have the simple star jewels models.
Are there here some members who work on their watches themselves ?
Because I have a technical question. I am currently working on a AR 167 movement, and when I tried to put the stem back in, the sliding pinion slipped out of place and I had to remove everything again. So my question is: when I take out the stem, should it be better to set it in hands-setting position, or in winding position ?
The movement had some problems, but they are all fixed now, so it would be time to put the movement back in the case.

Oh, and a photo of one of my Enicars is appreciated ?
so here is one.

I don't really fiddle with my watches too much but I'm sure one of the other guys probably do.

I can't help answer your question as the most I do (so far) is adjust a watch using a timegrapher.

But if you were to post your question over at the Omega Forums, I would bet you would get a good answer.

I have been a member over there for about two years, and so far, - and don't tell anyone - I do no yet own an Omega watch.

The community is very passionate and welcoming (if you follow a few rules) and there are several watchmakers active there who post every day. A fellow named Archer comes to mind.

I expect that there are a number watchmaker oriented forums as well.

Sherpa
Nice find Mr. Figit ;
Might be worth shooting a pm to Hunter ( on this forum as hns_panama ).
He made a recent introduction on here and does know and
work on the innards of some old Enicar models. He's also a respected
contributor to the WUS heroic Enicar thread.
Richard
D

I am very happy to have find out there is an Enicar dedicated forum.

Although I don't have an Enicar watch yet, I have been drawn to this fascinating brand for sometime now, I have been doing some reading and I am hoping to buy one soon.
I would like to own many models but the Sherpa Super Jet is on top of my list at the moment!

Thanks to this forum and the book from Martijn, I am looking forward to learning more and more about Enicar!

Staff member
Enicaristi
Sherpa
Welcome Deki and good luck on the hunt for the Super Jet.

A Super Jet is on my list eventually too

My name is Matthias and I have been into watches for more than 20 years but have only recently acquired my first Enicar (thank you Steve!). Seems to be a great watch brand and I enjoy it very much. I bought the Enicar book „Time for a Change“ and am having a great time reading it.

I also enjoy classic cars like many here it seems so I attach a photo of my favorite little car as well.

Hi,
I am also Matthias
I have also some Enicars, around 25 maybe, and you might know me from IG (same Name) or also the German Uhrforum.
Nice to be here (took some time i guess).
Cheers,
Matthias

Staff member
Enicaristi
Sherpa
Welcome both of you

Staff member
Enicaristi
Sherpa
Good to see you both here

If only I could take pictures as well as you Matthias. I might actually have hit my target for a new purchase by now!

Hi, I am carlo from Italy,
I started collecting enicars a little longer than a year ago. Here is my small collection of Sherpas chronographs.
Lovely forum this is, let‘s make it grow!
Cheers
c.

Sherpa
Now that is a Graph-ic display! Very, very nice. Jet Graphs are my favourite as I like chronographs with GMT complications